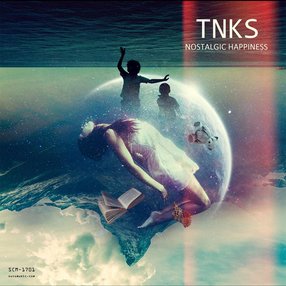 
Three years after their debut album (‘Gate One’, released by Sucu Music as SCM-1405), TNKS come back with their second effort, ‘Nostalgic Happiness’. The music on offer here is a very good blend of electronics and melody, with a lot of space provided by soundscaping guitars and sequenced synthesizers.
​Not a frontal attack to the listener’s synapses, but a tentacle-like embrace of their aural dimensions and souls.

The initial ‘Panic Room’ sports some jerky saxophone on an up-tempo, stop-and-go beat that invites to dance on a dance floor on the sea. The melody is sweet but not syrupy, and the somewhat anarchic interventions from the sax grant an unexpected level to the whole track.

‘Freetrip’ is a hypnagogic soundtrack to an imaginary ride on an air ocean. Minimal melodies and guitar arpeggios, interspersed with glitch rhythm and, again, the unexpected saxophone affirming subdued statements that nobody could ever contradict.

We pass through the rhythmic pulse of ‘Mechanical Bike’, issued by the band as a videoclip.

If nostalgic happiness is what this work tries to evoke, there’s no point in it where it is clearer than in ‘G3X’, what with the distant guitar chords and the bass drum dictating a mid-tempo beat that is able to conjure up gone days one will never forget.

‘Comfortable,’ the track that TKNS have also issued as a single, shows eighties-sounding synth chords and a dripping rhythm introduce a minimal melody which could come from an old videogame as much as from a memory of a hand-in-hand walk with a childhood sweethearts.

‘Stilo Silence’ is the most atmospheric track in the album. Sparse sounds, a sparse snare drum, guitar chords that drip like water, a sort of lullaby for future nights on the first human colony in open space, under the vigilant eye of some ringed star.

The chilled out beat of ‘Night Floor’ closes the work, where synths sound like distant trumpets on children voices and radios speaking from afar.
​
Memories frozen in time by gentle electronic sounds that wrap you up and highlight how much the band has improved their sound, writing, and approach in three years’ time.