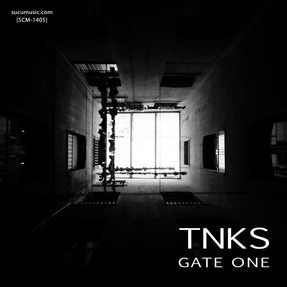 
Gate One is the first musical offering by Francesco Palermo, aka TNKS, and everybody here at Sucu Music is very proud of and happy for releasing such a beautiful work as this.

The nightly, highly metropolitan, electronic nature of this music meets the manipulations and visions by Purple Mountain Peal’s Gaetano Fontanazza and Tony Colina, whose intervention gives the music further colours and depth.

‘Gate One’ kicks off with ‘Theatrical’, a track based on a light, persistent rhythm track supplied by electronic percussion and bass on which an icy-delivered, spoken story of dislocation and insanity is told. Nervous, atonal, stabs of guitar are replaced by Gaetano Fontanazza’s trademark soundscapes and deep-space notes, which grace the breaks in the track and build momentum until the end of the track, which dissolves into space after Tony Colina’s final revelation: ‘I’m insane.’

The second track is ‘Nocturne.’ Again, the beat is danceable, driven by drums and distorted bass. Layers of spacey guitar and background keyboards create a sort of System 7-like atmosphere in which strange phone conversations can be heard. Conversations which speak of loss and resentment. The beat resumes, mercilessly, and guitars howl in the distance. Another break, and then the trippy coda starts, graced by classical keyboards and a tune that revolves in the air.

‘Office Automation’ opens with a Japanese voice and Fontanazza’s psychey, trippy guitar (which master Hillage would appreciate, no doubt). The beat mounts in the background and slowly comes up to the front, so that the dance can begin. Ominous keyboards loom in the distance, and the rhythm really conveys the idea expressed by the title, of a place where everything and everyone is automated to the point of losing any trace of humanity. Some breaks, and then the beat recedes for a while. The time has come now to create a sort of musical Laputa floating high in the sky and close the track on a gentler note.

The cryptically-named ‘Elephant’ is a mid-tempo affair (maybe in reverence to the pace of said animal) where female voices rebound and ricochet from each angle and a quiet sequence of notes in a minor mood maps the distance. Time for some rapping, then, strange as it might sound. Just a flash, then we are again in the middle of the night, empty streets, orange lights and a suburban tension that some distorted guitar chords help trace. A very metropolitan, post punk, kind of track with echoes of New Order or ever The Cure, all differences considered.

‘Introspective’ is a tell-tale title. The mood of the track is very … well, introspective, the rhythm quirky but not self-imposing. Voices of children playing in the background (maybe nothing but memories in our minds) and sounds suspended in mid air. And as you listen, you understand all of this could happen in a sort of playground of the dead, where only ghosts play and have a good time.

‘Sinapsi’ starts with keyboards rolling and looping.
The bass and very light percussion step in and again the atmosphere is foggy and urban. A sunset over depots and closed factories, maybe. Asphalt wet by rain and shadows jutting out of lanes and bystreets. A lonely man walks, hidden in his coat, staring at the land before his feet, unaware of the cars and life zooming by. A quietly desperate / desperately quiet journey into the night.

The final track of the album, ‘Inside Winter’, is very ambient. Jazzy piano and background noises (actually children playing table football) merging with long-sustained, airy guitar notes. No rhythm here, no danceability, because we need time to lay back and think of what it is all about even in the most crowded of cities. In winter, preferably.