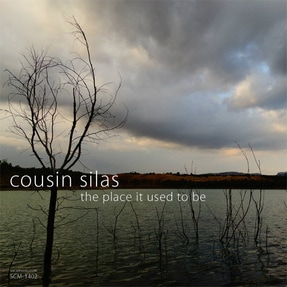 COUSIN SILAS
The Place It Used To Be


“The Place It Used To Be” is the first release of Cousin Silas under Sucu Music. In his own words: “[The tracks] are all aural sketches of a place I used to go to as a kid.
It's basically a small valley, a stream running through it and an old mill that had just closed down not long after we moved there. Very peaceful place”.

The album opens with “Autumn arrives”. A soft, soothing layer of synths which brings our imagination through scrubs of trees barely moved by a gentle wind, forefront of a coming season of mists and light rains.
The second track is the natural prosecution of what we heard in the previous one, but here the synths soon introduce us to a clean guitar which marks its own rarefied tempo, just like floating leaves carried by a river “Under Marrydale bridge”. Almost at the end a piano appears, only to vanish just seconds later leaving only a trace of reverb, de facto ending the track.

“Hangmans moor” is a quiet, desolated place shaped by synths and guitars, only momentarily revived by a couple birds passing by, after which everything comes back to its initial state of total, utter calm.

“Relics from the old dam” is a lullaby in the form of a piano ostinato upon which Silas creates sweet harmonies at first with the piano itself, then by his guitar and - in the last part – by a string section which fades into a bird singing as it was itself the final instrument of the track.

“The old waterwheel” is literally a track almost dunked in water. The sense of liquidness is perceived through all the development of the track, not only thanks to the bubbly synth pad but also via the drowning of the delayed guitar and piano notes in an enveloping reverb.

The long evolving “The stream never froze in winter” marks the exact center of the album, like a slow flowing river that separates a snowy plain in two white banks.
The over 12 minutes epic “The deserted valley” leads us in a long flyover upon  an empty landscape where everything is calm and quiet, with just the sound of a dripping piano that falls every now and then like water cumulating on a leaf and then overflowing down.

“The evening falls”, another over 10 minutes track, is one of the richest in terms of pure sound with moments where synths, pianos and guitars alternates in beautiful textures. Here the middle section serves as a breather as everything comes quiet for a while, only to take off again after a pair of minutes.

A sense of bliss greets us at the beginning of “Walking home”, a melodical unveiling of our own sanctuary, of the place where we can stay safe and free, of the place we can call our shelter: home.

Things gets spacey with the next track, remembering a time when you sat in your porch under a clear night sky and watched the world around you… and “The stars shone brighter”.

“At last the day is done…” is the conclusion, the goodbye. It’s time to close our eyes and enjoy the ending credits to these 78 minutes of walk down Cousin Silas’ memory lane.