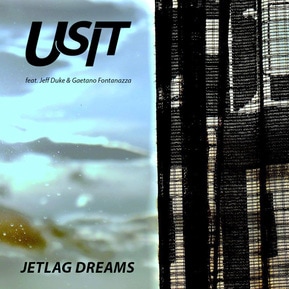 
​
USIT is the name of transcontinental duo consisting of Florida-based guitarist Jeff Duke and Sicily-based (and Sucumusic’s own) guitarist Gaetano Fontanazza.

“Jetlag Dreams” is their fourth release and the first one on Sucumusic.

The two guitar maestros are masters of electronic devices too and their music is a whirlpool where ambient, psychedelic visions and cosmic drones meet glitches and rhythms that add colours and dimensions to the whole. The working method adopted by Usit on their previous releases (“Approaching”, 2010 – “Reunion”, 2011 – “Somewhere in the Ocean of Night”, 2011) is live improvisation via Ninjam (an online protocol that allows musicians jamming together in realtime via the Internet), but for the present release each of the two men worked in their own homes, then sharing files and processing them. The result, as usual, is an astounding web of palette of sounds which flow in and out of categorization, thus pleasing and appeasing the senses of the listener.

“Inner Abductions” stops the previous chase and take us back into the realm of space ambient, with long, soothing soundscapes that spread timeless and in no hurry. And… are those voices murmuring in the distance? and, if they are, are they human voices or are they alien? For this could be an exoplanet forest we’re in, or just the intricate web of our own personality. The sparse, beep-like sounds we encounter along the way make very little to solve this riddle, so that the only thing we can do is to keep on letting ourselves be carried away by these sounds, whatever they are and wherever they may take us.

Can trip-hop mutate into a new form of ambient which doesn’t fear rhythm? “Up on the Windy Edge” seems to tell us that, yes, this is possible, with its percussive glitches embroidering the arpeggio and soundscape fabric of the music of this laid-back track.

“Unearthed” originates from the very heart of whatever we may think it originates from. The nucleus of the Earth, or the black hole at the centre of the Milky Way. It doesn’t matter, for both ways these are endless sounds which taste and smell of boundlessness, in a dramatic crescendo or revealing and blinding light. Unearthed from the ground, or unearthed from space, to form a whole. And then an ant-like horde of glitches appear, like radio signals from some remote quadrant need no decoding to be felt as the perfect counterpoint they are. A way to root it all again into the earth? Maybe. perhaps just another route to fly away on.

Just imagine an “Interstellar Bus Depot,” a corner on an asteroid, maybe, or a green desert on a planet, where rows after rows of abandoned interstellar buses are. The alien sun reflects on what chrome hasn’t got rusty yet – provided an atmosphere is that could justify the presence of rust – and complete silence. The ghosts of thousands of alien passengers hover and linger among these carcasses, unable to detach from their last ride. They float and they wait for yet another bus, a bus which is not rusty, a bus which will take them to their final destinations, as the alien sun rises and sets on end, oblivious to all of their needs.

Beware of appearences. As soon as “It hurts but I’m fine” starts, you might think we have another very fine if typical ambient track of the type Usit are masters at crafting, but then slabs of heavily distorted guitar riffs and even heavier drums step in which wouldn’t be that out of place in a “The ConstruKcion of Light”-era King Crimson record. Nervous, schizoid riffing that crash in and out of ambience and soundscapes. Just like a window opening and shutting on two dimension that appear completely different but which are ultimately the two sides of the same coin.

“Lizard Hunter” is almost danceable (provided you can dance to that 5/8 broken beat it features, that is), and the overall sound makes one remember about Mirror System (System 7’ more laid back twin project) at their best. Liquid guitar solos and sequencing on rippling soundscapes and drones. A well-deserved oasis after all the harshness of the previous track.

The album closes with “The Dying Night is the Dawn.” A Nocturne piece of music, as the tell-tale title suggests, which tries to capture that moment in time when night is not night anymore but is not dawn yet. A moment of transition. And, just like all moments of transition are thought to be, one wherein each neat boundary dissolves and all realities and dimensions overlap. Life and death, night and day, love and hate. Everything compressed as one, in a single moment that lasts for a second that could feel like forever, just like this track – the most “conventional” of the work, perhaps – seems to suggest.