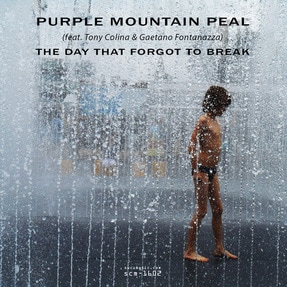 PURPLE MOUNTAIN PEAL
The Day That Forgot To Break


“The day that forgot to break” is the third album by Purple Mountain Peal.

This release marks a more piano driven declination of what the duo has to offer in terms of improvisation, creativity and madness. To sum up, what you are about to witness is less chaos and more melody. Take it with a grain of salt by the way, it’s Purple Mountain Peal after all…


​The first track, "The day that forgot to break" (which gives name to the album) begins with rain. And raindrops are the notes the piano will rain on you for the next seven minutes. The track is surely the most 'digestible' of the entire Purple Mountain Peal production; you can clearly hear hints of Steven Wilson's No-Man project, an extremely stripped down version of modern prog rock. A soothing melody from a slightly effected piano, complemented by a haunting guitar that darkens the aura of the whole track, takes us by the hand in what seems to be an endless becoming which never arrives. But still the rain falls, and still we wait for something, and still everything stands still in this culpably forgetful day.

A single piano note. Repeated. "Serenade to a dying star" is an obsession. More like a heartbeat. A life that doesn't want to stop. A sound that by the end of the track you know will stop, but still you get used to it because it crawls inside your ear, making the rest ˗ noises, dissonances, soundscapes, chords ˗ a mere surrounding. Sometimes it seems to fade away but it's still there, just toned down; sometimes it gets stronger, as if negating its unavoidable demise. And just when you think the heartbeat will never end, everything changes. It stops. It gives way to stacking layers of organs, scattered piano notes, guitars with endless choruses and reverbs culminating in a growing noise, a death rattle, and ˗ finally ˗ a longing climax of closure. The star is dead.

Cheers. Beers. Let's create something. The three stages of "This one's on the house", a weirdly procedural tune exploring the whole range of making music. Little by little things begin to wrap up: simple finger taps onto the wooden body of the guitar become loose rhythms; casual piano playing try and set the mood; chimes, reeds and even toy marimbas come and go like guest stars on another one’s platter; and in the meanwhile a single string strumming slowly turns into a guitar loop upon which the piano finally lays sweet harmonies, with a little big help from his hammond buddy. From here what was at first totally acoustic turns electric, even with a subtle hint of drum machine. The creation is complete, the release of the accelerator pedal is again acoustic, decelerating, ending, done.

The last track of the album warns us: “Do not leave your dreams unattended”. Someone’s gonna steal them or, better, they may even come alive and haunt you. The choice is yours. The recurring theme is a piano that, like an alarm clock, disturbs the seemingly calm flow of the music by constantly waking you up with noisy tingling high pitched notes, while a melancholic melody tries to remind us that a dream, even if unattendend, is still a dream. A peaceful and calm dream. At least when not forgotten somewhere, in that case it will constantly ring your inner bells just to be recalled.