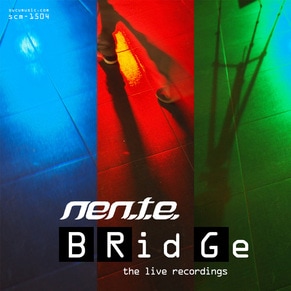 
‘BRidGe,’ Nen.T.E.’s latest offering and the first one on Sucu Music out on July 14th, 2015, for the Netlabel Day 2015 special event, is based on two live performances recorded between October 2014 (tracks one to five, as part of a live installation at ‘Scritture Mobili’ – Mobile Writings – an exhibition by Sicilian artist Michele Lambo) and February 2015 (tracks SF one to five).

Both performances were held as a single stream-of-consciousness-like improvisation for electronics, guitar, rhythms and effects, in a way not so dissimilar to what the likes of Tangerine Dream used to do way back in the early seventies, but with a psych-droney-ambient feel that is third millennium to the quick. For this release, however, Nen.T.E. chose to dissect their jams into proper tracks, which on the one side makes the production more accessible to a lot of people, on the other side leaves out nothing of the essence and the beauty of their music.

Off we go with ‘Louder’, the first track on the bill. A low drone introduces Gaetano’s trademark ambient guitar, backed by ominous heartbeat-like bass drum and assorted sounds and effects. The rhythm mounts, and the guitar paints dark nighttime scenes where fliers whizz high across mazy megalopolises above which more than one moon gleam and watch.

‘We Have No Idea’ is based on atonal guitar, sound effects and synth conversations punctuated by something sounding like meteors falling or shuttles taking off, for the future is the time this music comes from. No rhythm. This track is really spacey and ambient from beginning to end.

The strangely-entitled ‘Russolo’s Toy Shop’ takes its inspiration by Art of Noise’s earliest records – a band both Gaetano and Ermanno are very fond of – and, in its turn, refers to Luigi Russolo, the prime mover of Italian Futurist music movement of the same name. Vocal samples create rhythmic patterns like ‘free words’, and Gaetano’s almost-jazzy guitar plays in the midst of swathes of sounds and static. A single bass drum beats to the end, thus adding a sinister dimension to the track, which fades out as peacefully as it began.

White noise and gamelan-like notes upon which airy, ambient, guitar soars with slow, long, placid notes. This is the beginning of ‘Spots’, which continues as if airborne on a magic carpet in a sunny sky. Esay to think to Roger Dean’s airiest paintings while listening to these thin-air notes. Towards the end of the track, dissonant background noises and drones add to the overall atmosphere, until the track sort of decays and dies out leaving a perfumed wake behind.

‘Woke up in Grain’ starts as a dissonant cacophony of sounds and notes, until synth notes ooze in, creating strange, shor-term, melodies, and more hissing and crackling and bubbling leaves one so uncertain as to where one is. Repeated chords and noises like underground dripping, along with long delays and echoes conjure up the idea of a huge cave at the centre of the earth, and that is where we’re left when the track fades out and ends.

‘Scalloped Shades’ begins with two bass synth notes which seem to pay tribute to David Lynch’s ‘Twin Peaks’. More synth step in and build up the kind of melody an artificial intelligence might conceive of in three or four centuries. Sparse notes offset by manipulating effects create an atmosphere shades could really wallow in, until some laid back rhythm begins upon which more notes rebound and ricochet, come and go, like lights that passing cars project on dark walls. On, off. On, off. On, off. On the watch out for what could lurk in the shades.

African-like rhythms introduce ‘Bouncing Eyeball’. Few, echoing, guitar sounds and a series of percussive elements make of this short track a sort of journey in the thick of a jungle, and thus a completely different atmosphere from the ones felt so far, which shows how broad the sound palette of Nen.T.E. is.

Static, glitches and background chords for ‘Did I ever tell You’ take us to yet another nocturnal scene in this musical history that ‘Bridge’ is. There are very subtle changes in the texture of the sounds and the dosing of effects. The music seems to remain the same, but in fact it floats and flows, carried by the subtlest rhythmic patterns you might ever think of, and even glitches sort of tell a story of their own and, other than being simple ornament, are fundamental to the overall architecture of the song.

Alien sounds, noises arriving from outer space and the unquestionable guitar announce us we’ve arrived to ‘Quantistic Oddity.’ Just the time to come to terms to this new point in Nen.T.E.’s time-space port, and electronic drums begin to work, thus leaving the distorted guitar free to have its spacey say. A final crescendo of rhythm and sounds accompanies the guitar harmonics to the end of the oddity and of the track itself.

Although taken from a live performance from February 2015, the last track on the bill, ‘Baobab – Woke up in Grain, Reprise’ can be considered as the part two to ‘Woke up in Grain’ (which comes from the installation of October 2014), because they share the same sound set up, and, up to a point, the same feel. More rhythm here, though, and Africa is again the most plausible place one can think of. Africa and its jungles, more than Africa and its deserts, with congas and metal percussion, and even the swooping sounds of synths sounding sinisterly like snakes slithering, unseen, in the green foliage. When the rhythms subsides, the guitar remains to bid us all goodbye with its usual long, airy, ambient sounds, thus ending the whole release on a pastoral note you could never have expected from such a wonderful band.