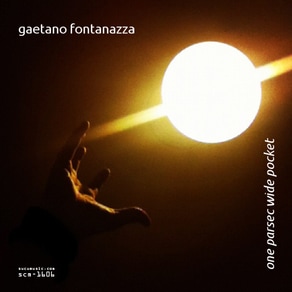 Ambient guitar maestro presents us with a new series of tracks which are the perfect vehicle to explore sonic landscapes of different nature.

Surprisingly enough, the album kicks off with “Back into my Room,” a short piece for looping noises and concrete sounds, scratches, bleeps and crackles.

​“August Never Ending” sets the scene with sparse notes and chords that create a gentle feeling of suspension and displacement. The melody the guitar paints ripples like wavelets on the surface of a pond, and it is a relief from the somewhat claustrophobic atmosphere of the opening intro.

“Eleven” is a track which was composed and recorded on 11th November 2011 (11.11.11) foa a livelooping compilation on palindrome dates. It lasts around eleven minutes and is based on a D 11th chord. The feeling is very chilled out and relaxed, Fontanazza weaves his trademark sonic carpets we can glide on. Just a few notes, elongating, reverberating, echoing in a minimal cosmic symphony for guitar solo. Crickety, morse-code-like glitches step in at about the middle of the track, and here new sounds appear, caught on Moebius-strip loops which serve as a background for gentle acoustic guitar melodies and scat whistling that take the track to its end.

“Mellowing Tides” is a tell-tale title, in that the mood of this track is precisely what its titles hints at. Think of the slow breathing of the sea, water ebbing and flowing under the silent direction of the moon above. Never-ending chords and gull-like notes, maybe waiting for some ghost ship to float on the horizon with its load of secrets and past.

“Gaining Altitude” was originally released in the compilation “Silas and Friends, vol.4” (WAAG, 2015). Here Fontanazza’s guitar creates the aural illusion of being atop a high mountain, with the whole world glinting below. Looping sounds and airy guitar at their best. There could be balloons flying by, or a silent glider across the sky. Only silence, and these notes, which are of the thin air and the light and the wind.

“Sky River” is a track built on noises and effects, counterpointed by guitar harmonics and prolonged delays. A slightly disturbing short track which counterbalances all the earlier gentleness experienced so far.

The title track takes us back again on Fontanazza’s spacey ambient paths, light again, a sublime sense of vastness again, with some cosmic soloing reminiscent of the best vintage psychedelia.

“Trees on Mars” The title refers to an optical illusion in a photograph of the polar surface on Mars, where some mushroom-shaped, dark green formations can be seen which could be mistaken for alien trees but in fact are methane formations on the dry ice surface. Accordingly, this track really sounds otherworldly, entirely based on minimal, heavily effected chords that need no other ornament to create a little sonic jewel.

“Breakpoint” resumes Fontanazza’s vision of endless spaces where nothing but sound and peace seems to exist. This is the sound we can experience just a second before going out of the atmosphere and into the silent black of the universe. This is the sound the interstellar void would have if only sound were possible in the cosmos.

“The Last Hour” is the closing track. The title doesn’t refer to death approaching but to the last hour of light before sunset. The undertow sound in the background was recorded on a beach right at this moment of the day, a moment of passage which, just like all moments of passage do, merges all times into no-time and all dimensions into no-dimension, thus making everything possible.