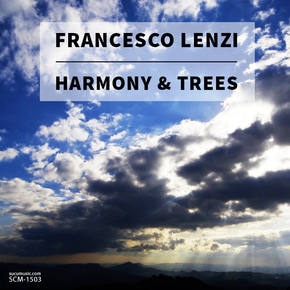 
Sucu Music is very happy to release ‘Harmony and Trees’, a work by Francesco Lenzi, a guitarist from Arezzo, Tuscany, whose musical offering he himself calls ‘sober psychedelia.’ Well, if you’ve thought so far there can’t possibly be any psychedelic music without mind-fucking substances, we think you will have to reconsider it all after listening to this superb work.

“La Quiete d’Oro” (Golden Quietness) is the first track of the set. Spacey guitar and infinite notes not so distant from Michael Brook’s masterpieces, Lenzi takes us on an airborne trip across the sky, and it is very easy to close one’s eyes and watch imaginary landscapes where there’s no horizon between the land and the sky and one merges into another. Spacey, rhythm-less sounds that expand time and make you wish this track had no end.

“Indietronika” is a symphony of reverberation and sound effects. Are we in a cave close to the centre of the earth, or the inside of a giant, abandoned starship from another world, or maybe a forest of sentient metals and crystals? No need to ask, no need to worry. Just let yourselves be carried away into this vortex of pure sounds, it’s worth the trouble.

“Vintage Kling-Klang Machine” is a one-minute interlude with sparse electronic sounds. A rest after the trip so far, if you like, before we continue our voyage into the psychedelic worlds of Lenzi’s music.

“Phoenix Rising” opens with an ominous sense of impending doom. Deep, dark sounds, unhindered by the logic of rhythm, for rhythm would compress the mind into the forced ways of logic, whereas everything is malleable and expanded here. That sense of gentleness of the first two tracks is absent here, everything dark and whispering. Just think of a storm brewing up in the air, and you’ll get the idea.

Can love be psychedelic? Can psychedelia be sentimental? Of course it can, although the only love song possible will necessarily be unconventional. This is what “Unconventional Lovesong” seems to tell us, with his sounds, loops, delays and effects. Sweet textures, very ambient in their essence, but not so ambient as to be relegated as music for lifts. These sounds come to the front and speak right to our minds and hearts. Music to listen to at sunset? Yes, if the sunset we’re thinking of is a Philip K. Dick sunset, of course, in a world where androids dream of electric sheep.

With “Space Sirtaki” we have the first encounter with something definable as rhythm, although created by guitars and bass and loops. A series of guitar chords looped into a dervish-like dance for automatons gyrating in a huge hall, or a labyrinth at the centre of which not a minotaur, but a baby black hole waits.

As the title suggests, “Paesaggi Paradisiaci” (Paradise Places) is a very spacey, ambient guitar track with airy chords and arpeggios. If a synth swooped in, such a track as this could be called cosmic. The mood is quiet, relaxed and luminous throughout. An oasis floating in the air. A painting by Roger Dean. The flight of a butterfly slowed down one hundred times, a fresh waterfall in the midst of an uncharted forest, this is what this track is like.

“Can you imagine a Psychedelic Island?” asks the title of the next track, and a jolly good question it is. What would it be like? I guess many of you would think of a sort of Woodstock-meets-Monterey kind of things. Well, Lenzi seems to have quite a different idea, my friends. The mood is very somber here and the atmosphere is dark. Not unfriendly, but forget the colours of Grateful Dead or Joan Baez’s gentleness. Dark, sinister sounds, much more like the hole Alice fell in that the wonderland she found after her bum bumped onto the underground soil.

“Sundrone,” a feast of looping, disturbing, distorted sound and metallic chords. It could be doom if there was a rhythm track, but since there is not, it is ….. doom all the same, maybe of a post- type. Droning psych metal? Why not?

How can one not love maestro Erik Satie, the man who replied “In the form of pear” to some dickhead music academic who’d asked him what form his songs were in? Lenzi pays homage to the French composer with the track “To Erik Satie”, in which he recaptures the Satie’s light but esoteric spirit. No piano, of course. Just a guitar that weaves chords upon chords. Thinking of Robin Guthrie here would not be blasphemy.

“Walking through the Hall of the Holy Mountain” is the closing track on this beautiful release. The droning, looping sounds are wonderfully descriptive and, while listening to this track, it’s easy to feel tiny and in the middle of an enormous hall built in the heart of a mountain. Distorted guitar notes whirl and soar, in a vertigo of sensations that are the essence of what we call psychedelia. Then, towards the end of the track, all the fury subsides and finally turns into an otherworldly lullaby for the psychically enhanced which ends abruptly, leaving us listeners senseless but happy. Soberly happy.

And now for some credits:
Francesco Lenzi, in this release plays guitars, effects, bass
Tracks 4,5,10 & 11 recorded and mixed in Francesco's private homestudio, between winter 2013 and spring 2014.
Other tracks recorded and mixed at the Canyons studios by Enrico Andreoni, between january and february 2015