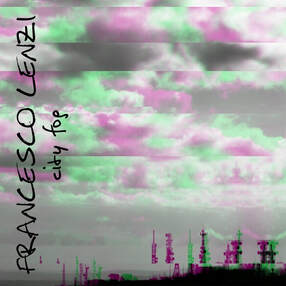 
Francesco Lenzi's latest release City Fog is made up of three long pieces of guitar psychedelia that, though clearly connected to his previous works, offer new glimpses of his sonic world and palette.

'Welcome to the Temple' is a cascade of looping guitar sounds which sometimes sound as if Fripp's frippertronics were removed from their urban context and suspended in mid-air, sometimes change into heralds of impending news whose nature the addressee can only surmise. The overall tone is clear and hypnotic and the rhythm the looping chords create does not stray from a mid-pace lull which caresses the senses.
An abrupt stop introduces acoustic-like sounds processed into the sonic equivalent of ripples on a lake disturbed now and then by short shocks of distortion like stones skipping on the surface of the water. Another change of scene brings forth chords and droning notes. This is the heart of psychedelia here, perhaps the inner sanctum of the temple in the title. Everything is looped and repeated, no doubt to make sure the listener may experience a sort of mystic ascent. As the track approaches its end, the chords become longer and longer, no more ripples but waves, brainwaves, space waves, you name it.

'Myth-Mystic' explores the possibilities of guitar notes and sounds steeped in delay and reverb. Space loses any sense of dimension and the sparse, gentle notes rebound this way and that with no hurry nor worry. Fragmets of bluesy licks like nuggets from the past wind their way through this boundless space, and the feeling is that of an introspective chat Lenzi's having with himself and all those who want to take part in it. In the final section of the track gentle chords open and echo. The myth is here, the mystic surrounds it, and the currents ripple again.

'Lysergic' begins with what we can describe as a journey underground. Not to the centre of the earth, maybe, but surely to one of those caves full of giant crystals like in old sci-fi movies. Loops of electric and acoustic guitars add unrest to the initial, somewhat suspended, atmosphere. Melody is banished in this feast of sounds in which waves roll and notes chase one after the other. The acoustic guitar add a somewhat bucolic dimension to the scenery, but it doesn't last long. Midway into the track we're back into our underground world of adventures, in a part of it which sounds darker and more ominous than before, the part that could be inhabited by those creatures of the mind this music conjures up. For the first time real rhythm, albeit heavily processed, creates the backbone to a tangled melody like those only goblins could create. The journey becomes noisier than before. The temperature gets hotter, as it were, as we descend further down, and then everything fades out and the end of the trip will be known only tho those who go on it.