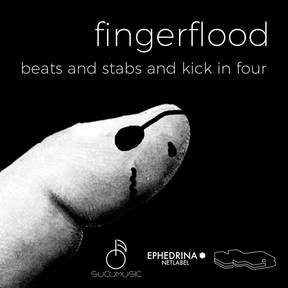 FINGERFLOOD
Beats And Stabs And Kick In Four


Fingerflood is an electronic music project born as a part of the many musical extensions of Gaetano Fontanazza.

What we have in this debut release, named “Beats and Stabs and Kick in Four,” is the strong intent to basically dive into the fat obscure electronic moods of dub techno, somehow near to the Berlin scene if you like. The release has an ideal split in the middle of its playlist, switching from dub techno to more dub idm-oriented tracks.


​Songs flow of course but rather than a continuous stream of consciousness they almost seem to have a kind of ideal structure of arranged, or deranged, pieces of music.

The feel of an “opera prima” is clear here. The title itself winks at the well known Propellerhead album of the nineties, which was an experimental sound lab in its way. Some features in this release comprise the young and awesome producer/dj Federico Di Gangi on synths cutoff in the track “Floater” and the most valued pianist composer Fabio Anile in “Blesser”, who donated one of his source soundscapes (part of an upcoming release on the Laverna netlabel) to make an extended sunny dub remix happen at the end of this album.

In force of our faith in collaborative free distribution, this six-track EP has been co-released on the same day by SUCUMUSIC, EPHEDRINA NETLABEL and NOISYBEAT EXTENDED.

​Hopefully more to come from Fingerflood, fasten your seatbelt and be ready to receive beats and stabs and kick in four in the face. You will be dragged into a suspended land where you want to let the bass frequencies fly you on a moving liquid matter of floating sequences, pads, voice samples and much more.​​
download
ALTERNATIVE DOWNLOADS
NOISYBEAT EXTENDED
EPHEDRINA NETLABEL
SoundShiva
Sonicsquirrel
Jamendo