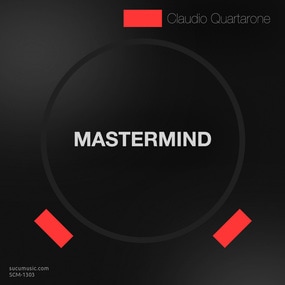 
Mastermind is a twenty-minute ep by Claudio Quartarone, a renowned Sicilian guitarist whose works spans from jazz to classical to experimental music. It is possible to listen to some of his musical directions in the six tracks which make up this eclectic release, of which all at Sucu Music are proud.

“Back to the Nature” opens with meditative sounds and echoing guitar that works as an intro to the somewhat submarine quality of the track. When the drums kick in we are in post rock field and the electric guitar melody is dramatic as it could be in a soundtrack to a film.

The title track is a triumph of echoes and sound effects. Again, the rhythm track gives the number a danceable nature, in a beautiful contrast with the openness of the echoes and looping that swirl and sweep in the background.

“Modal Age” fades in from a distant horizon. The sound is very ambient, almost reminiscent of cosmic music, so are the modulation and the harmonic changes, not so distant from some things a lover of Steve Hillage might be acquainted with. But then percussion steps in, and everything changes. The track evolves into a sort of cyber-techno for faraway space stations.

“Sasha” presents a series of modulated sounds supported by straight rhythm on which a jazzy guitar glides and slides beautifully. The mood of the track becomes even more electronic as it approaches its end in a crescendo of modulated sounds that make you think of alien, robot conversation.

“Strange in Town” opens with phased sounds and distant chords which hover in the air, aided by noisy blasts of starships taking off and landing. The track is so spacey and cosmic that you can almost picture a nebula in front of you. Then a moment of peace, the sunrise in an alien place full of beauty and serenity. Clusters of gentle notes and laid back mood in the second part of this track, until the by-now familiar sounds and blasts announce us the starship is ready to take off again and sail until the end of the track, in search of the new, nth planet do explore.

“Swell” is a galloping track where acoustic guitar chords are counterpointed by harmonics and some background electronic. Just imagine a train rolling across a desert plain. Then, all of a sudden, percussion steps it and the mood of the track changes completely. The straight bass drum gives the music a sort of danceable feel which harmonises with the guitar, which keeps on playing chord melodies until the end.