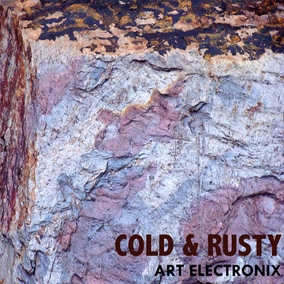 
The music of Art Electronix is minimalist and rough, but it makes your head swing to the beat, as much as it makes you feel the rhythm whistling in the pipes, gurgling in the tap, dripping like raindrops on the window sill, cats meowing and the fridge purring. All this turns into a rhythmic march of existence, the music of a musical box, or crammed tricky electronic circuits. As if robots were singing an ode to existence.

The first track, "Cavitation," begins with a bass drum, which is typical for dance music, but then the space is filled with high-frequency drones, additional percussion, drum machines, and processed dub effects. Reverb and echo are imposed on, Jamaican style, nevertheless the music does not evoke the island. What we have here are man-made landscapes, basements, ceilings, embroidered with endless highways of pipes. If you listen to acoustic spaces in basements and boiler rooms, they’re very similar to the drones superimposed on top of the mechanical repetitive, mocking, industrial drum machine here.

"Wasp Plexus": Oscillator synthesizers subject to the law of random modulation. Now the oscillation frequency is smooth, then it is fast. This creates a foreground and a background. In the background there are stars and cosmic infinity, constantly randomly varying metallic squares are featured in the foreground. A space like a swarm of wasps, swirling fractal sets, the dangerously approaching buzzed overtones. It is not clear where the deep postpones the Low Pass Filter.

"Cat on Rusty Tubes": The track is filled with an original sequence which is subject to the same random modulation, thus demonstrating the broad scope of this method to create atonal music. Going further into the composition, we find a meowing-cat-like synth, more similar to a prolonged roar, sometimes appearing in the drainpipes network. All of this is flavored with generous strokes of solo drums created by the noise generator, and the resonant sounds of an analog synthesizer, as always bursting suddenly and suddenly disappearing.