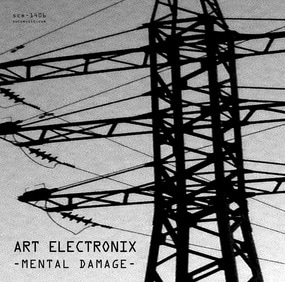 
Art Electronix are back with their stripped-down, back-to-basics form of electronic music, and they show again their mastery at creating post-fallout atmospheres using the minimum instrumentation, without getting lost in uslesess padding out and embellishments of any sorts.
Raw (nuclear) energy and creativity at (radioactive) work here, in the eight tracks which make up this twenty-nine minutes’ trip to Mental Damage.


“X-Ray” is the starting track in the album. A sound frequency, ominous in its immobility, introduces us in what can’t but be a dark, underground tunnel where the remains of some nuclear blast rot and decay. Geiger-counter glitches create a sort of beat in the second part of the track, when low noises and soundscapes of nondescript nature add to the eerie atmosphere of the track.

In “Stuff from Shelter” the beat of a rhythm box sets a danceable pace, provided you want to dance in the fallout, on a distant, deserted industrial area, that is. No melody or catchy chorus here. Just the screeching of metal rubbing on metal and the usual brewing of synthesizers in search of radioactive activity. A rave party for the post-nuclear-age lost, on the green dawn of a new day, where mutant people in white protective overalls plod around, oblivious to the effects the new air has on them.

“Pixel Building”: quirky beats, although in four-fourths and danceable, seem to come up from the bottom of an alien ocean, only to take a dive again in its abyss. Eerie sounds and bleeps and glitches counterpoint the submarine rhythm and add a sort of airy dimension to the track, like talking clouds floating overhead. Do not look for any sing-along melody here, for this is not the right place for it. Think of flying saucers on patrol, spinning dervishly in mid-air, mesmerised by the wilderness below before reporting it all to their mothership.

“Outside” introduces distant drones and face-to-face percussive sounds which little by little build up a beat only the most daring among you could think of dancing to. Outside of what? Some bunker, maybe? Report to base, do you copy me? The end of rhythm at the end of the track does not give any hope of recovery.

“Manual heart” kicks off with a steady beat created by bass drums and synthesizers. Swoops and whooshes of sounds fly across the aural space as the rhythm increases its power and presence. No straying from the initial atmosphere of the track, just sounds creeping in and out of the hammering rhythm. Everything pared down to almost zero degree, yet one senses this is the way this track has to be. Anything else would just be spurious and useless.

“Ejection” is a jamboree of rhythm on drones and fluttering sounds. Ejected from the core of a marooned space station, maybe. The spluttering noises of some machinery gasping their last before expiring completely, the sense of utter isolation in an unknown quadrant of one’s own existence. There’s even some distant voicing, but do not hope for rescue. They’re just old recordings of a crew who is no more.

“Magnetit”: a train rolling on a radioactive desert, the instruments droning and bleeping, and an almost inaudible voice repeating some incomprehensible info. Nothing to see out of the dirty windows but desolation and destruction. This train rolls on and on, oblivious of whatever still slithers or flies or trudges around. It terminates at a station from which no other departures are scheduled.

“Emitter” is the last track in the album, and in a sense it takes us back to the point the work had started, so that the circle is closed. Just rhythm, synthesized bass and soundscapes. The usual noises and whoops and the usual, claustrophobic atmospheres which are the band’s trademark. Very hypnotic and entrancing in its bareness.